"At about 17:00 on May 18th, as the light was fading at the end of a bitterly cold day, the last bait pellet from the last bag at the last depot dropped onto the Parydin Peninsula at the western tip of South Georgia.  That pellet bounced and settled into the scree on a steep mountainside, and the moment that had seemed so far away for so long was finally upon us.  We had finished.  We had really finished."

This was part of the final transmission of zoologist Tony Martin whose 25 man team had undertaken the largest rat eradication in history.  An incredible habitat restoration project to save populations of wildlife indigenous to this remote location from the ravenous creatures.

Ox Box was proud to be part of this historic accomplishment:

A hurdle which threatened the success of the project before it would begin was a method of containing the pelletized poison for delivery.  The journey would be 17,000 miles and take four months mostly on board ships.  Once there, the product would need to be air lifted to land where it would be stored outside for several months.  After use, the containers would need to be left behind with little or no environmental impact.

An ideal solution would be Ox Box's Eco-Shield weatherproof crate boxes.  Eco-Shield is a corrugated material that incorporates plastic from recycled water bottles to enable the boxes to withstand exposure to the elements.  The unique chemical make up allows the boxes to be recyclable and biodegradable.  In addition to being ecologically sound, Eco-Shield crate boxes are extremely strong and durable.  This would prove critical for the project as each box would need to contain 800 lbs of pellets and stack three high.

"We deployed 450 Ox Boxes by helicopter and used the contents of every one.  The boxes were absolutely superb.  Not one was damaged or crushed when we unstuffed them.  I rather think that they will quickly become the industry standard for this type of work now."  Tony Martin
﻿﻿﻿﻿﻿﻿﻿﻿

The Myth: Making paper destroys forests.
The Fact: Paper production supports sustainable forest management.
The U.S. paper industry promotes sustainable forestry and depends on sustainable forest growth to provide a reliable supply of wood fiber. Paper manufacturers do this by encouraging forest sustainability through their purchase and use of certified wood fiber and by promoting sustainable forest management policies and practices at home and around the globe. By providing a dependable market for responsibly grown fiber, the paper industry encourages landowners to continue managing their forestland instead of selling it for development or other non-forest uses. All cited facts are quoted directly from the source unless otherwise noted. Where indicated, Two Sides U.S. has summarized lengthy information, but links original sources are provided in the footnotes. Information in brackets was added by Two Sides U.S. for clarification purposes. How does the U.S. paper industry promote and support sustainable forest growth? 
Sustainable forest management is commonly viewed as one of the most important contributions that the forestry sector can make to sustainable development.1 [The future of a thriving print and paper industry, and all its economic spin-offs, also depends on well-managed and healthy forests]. 1 UN FAO, 1995. 2 WBCSD and NCASI, 2005. 3 AF&PA, 2011.  The income landowners receive for products grown on their land encourages them to maintain, renew and manage this valuable resource sustainably. This is an especially important consideration in places facing economic pressures to convert forestland to non-forest uses.2  (Two Sides Summary) As part of its Better Practices, Better Planet 2020 initiative, the U.S. paper and forest products industry is encouraging forest sustainability by seeking further increases in the amount of fiber procured from certified forest lands or through certified fiber sourcing programs in the U.S. by 2020. The industry is also working with governments, industry and other stakeholders to promote policies around the globe to reduce illegal logging. Better Practices, Better Planet 2020 is one of the most extensive and quantifiable set of sustainability goals for a major manufacturing industry in the United States. AF&PA member companies are committed to achieving these goals by transparently reporting the industry’s progress through an annual report on paper recovery and a biennial Sustainability Report published by their primary trade group, the American Forest and Paper Association (AF&PA).3 [AF&PA compiles and
analyzes data from member companies that make more than 75% of the U.S.’s pulp, paper, paper-based packaging and wood building materials.]
 All members of the American Forest and Paper Association owning forestland must conform to one or more of the major credible certification systems in the United States. These include: the seven regional forest management standards developed for the U.S. by the Forest Stewardship Council (FSC); the Sustainable Forestry Initiative® (SFI®) program; and systems endorsed by the international Program for the Endorsement of Forest Certification (PEFC). In North America, PEFC has endorsed the Canadian Standards Association program and the American Tree Farm System®.
In addition, all AF&PA members sourcing fiber directly from the forest are required to adhere to the organization’s Sustainable Procurement Principles. These principles require support of programs that supply regionally appropriate information and services to forest landowners regarding best management practices; reforestation; afforestation (conversion of non-forested land to forests); visual quality manage-ment; management of harvest residue; conservation of critical wildlife habitat; threatened and endangered species; and Forests with Exceptional Value. Among other things, these principles encourage the use of qualified resource professionals and loggers when applying sustainable forest management principles and encourage programs for the purchase of raw material from recognized qualified logging professionals.
4 [AF&PA compiles and analyzes data from member companies that make more than 75% of the U.S.’s pulp, paper, paper-based packaging and wood building materials.] 4 AF&PA, 2010. 5 USDA Forest Service, 2010. 6 SAF, 2007. What is the evidence that U.S. forests are not being destroyed by papermaking, and what are the causes that may contribute to future destruction? 
In the United States, we grow more trees than we harvest. The country continues to benefit from a large and diverse forest inventory distributed across about one-third of total land area. The amount of U.S. forestland has remained essentially the same for the last 100 years at about 750 million acres, even though the U.S. population tripled during the same period. 5  Over the last 50 years, the volume of trees growing on U.S. forestland increased 49%.6  The gross statistics on forest area mask substantial fragmentation and outright losses in U.S. forest land at the regional level, particularly in areas adjacent to growing urban areas or where recreational development is prominent. Fragmentation and loss is further compounded by the sale of forest lands to firms and individuals whose primary focus is not active forest management for timber production, forest conservation, or other purposes. With the loss of an active management focus and the revenue streams 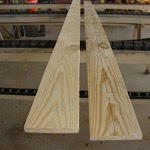 When resawing HT lumber, it is important to make sure that the marks conform to ALSC requirements.

If you are consuming HT lumber to build your own Wood Packaging Material that your facility has resawn inhouse, then no additional marking is required.

If you are selling HT lumber that your facility has resawn, make certain that a complete HT mark is on all pieces of material. If you only have a partial HT mark, another full mark must be applied to the piece. Since the original piece has been altered, it may be necessary to obliterate the original grade marks as well. ALSC Lumber Enforcement Regulation 5.10.1 states "When grade stamped lumber is resawn or remanufactured in such a way as to potentially alter the grade, the original mark shall be removed or obliterated..."
Sections 5.10.1.1 & 5.10.1.2 offer two exceptions to the obliteration requirement, though. The ALSC Lumber Enforcement Regulations can be accessed at http://www.alsc.org/greenbook%20collection/LumberProgram_EnforcementRegs.pdf. If you have any questions about how these regulations pertain to your specific circumstances, please contact us.

If you purchase resawn lumber, make sure that each piece has a full HT mark on it. If only part of the load is marked, then this material is out of ALSC conformance. The HT marked material would need to be separated from the unmarked pieces. The properly stamped material could then be used in the manufacture of IPPC conforming WPM, and the unmarked material could only be used for domestic purposes unless retreated and subsequently labeled.